Eight Variations on a series of shapes. 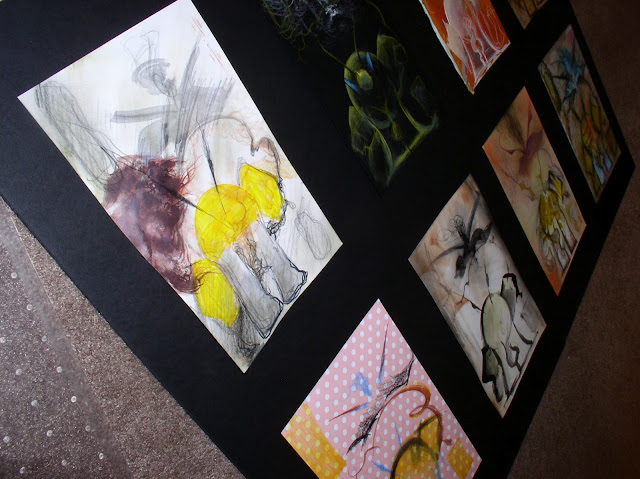 Thanks for everyone's patience! .. missed last week  posts, so hopefully THIS one'll make up for it... !

Here's a link to what Jon thinks is my strongest chickens page yet... 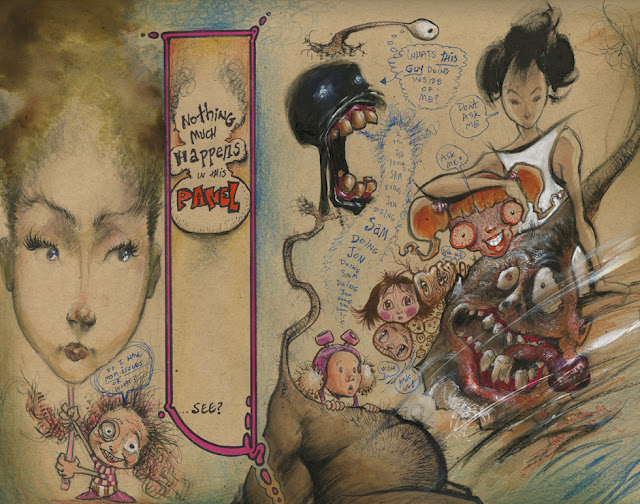 I actually prefer the one NEXT week page (which may be going up today) called "Anatomy of a sexists drawing" because I'm proud of the fact it's possibly the most ugly-honest Chickens page I've done so far. In fact i challenged Wayshak to try to paint something as unfinished-ugly as this, so he may kick my ass and do it, well see.

After hanging out last week alex and skinner last week..  finished an interview together.. and put on freaky masks afterwords for no apparent reason...

...i got TOTALLY INSPIRED and by it all... and wanna try some collaborations with Alex, Skinner, Dave Correia too, these guys do the same thing for me Wayshak does.. wake me up! Make me not take crap, myself, my life... for granted. Any excuse to brush off the barnacles  and shake off the moss, eh?

Well, a little moss is cool, but still.. 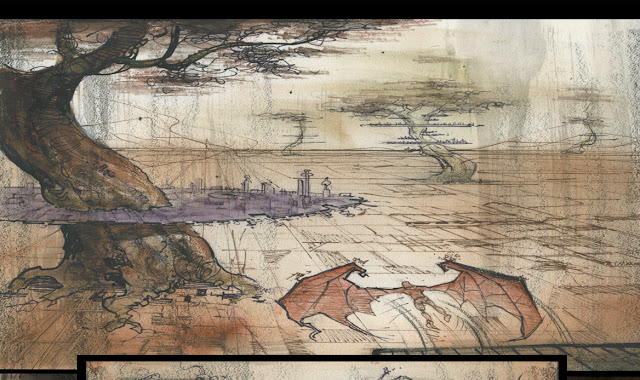 Kinda can feel it the whole Hollows issue coming together.  I did used some black border, a few digital darkening tricks,

...but over-all it feels rather moody, rougher ( which is what i wanted) and hand-drawn and organic to me. Above is  a more finished version of that page i posted before.

The Hollows are less zombie or vampire like.. and more ghostly which i think seems to suits this book better. This sucker should be out for Christmas.

I like the winged dude and the little girl, but the little pink guy, urp is my favorite so far.

I think it's cool to just a snippit of a panel, a teaser... then later see the whole image in the printed book.

Ops, grabbed this instead... obviously an aliens page.. oh what the heck... may as well leave it up. This 8 page stories came out in Dark horse presents, but it'll be collected in a trade later so you may just wanna wait for that.

Here's one of the few MCP covers i really enjoyed at the time, and still DO like. 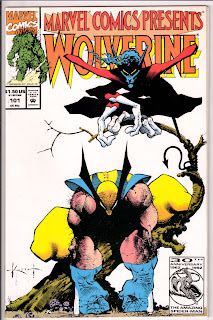 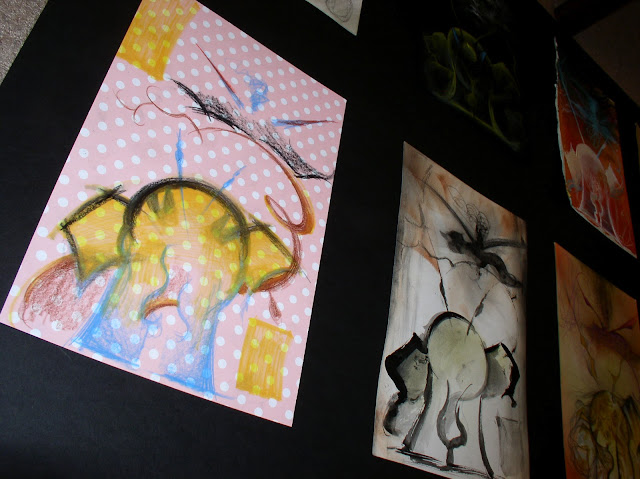 I thought it would be interesting to revisit this page with eight different versions of it in a new larger painting.. 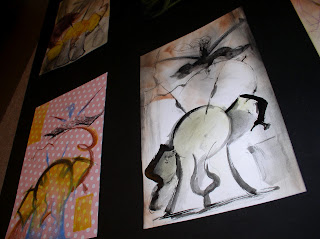 I did in a series of drastically different styles. It's not trying to seriously compete with the old cover... more of a wink to the old classic one i did. 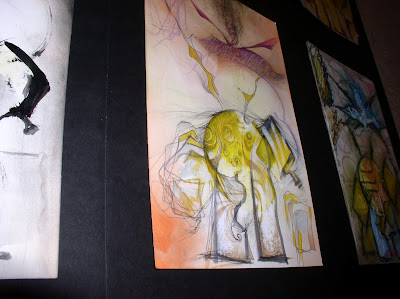 I won't publish it, i just did it for a gallery piece. Just a goofy-assed experiment. Interesting when you break it down, how simple a composition really is.. it could have been drawn any any style.

Course no way Marvel would have published it in a comic if i gone THIS crazy way back then. 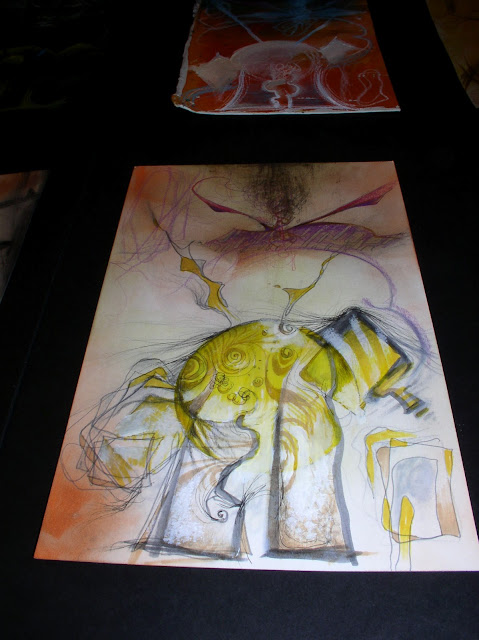 This feels really feeing in a way for me.. can't explain WHY really..

I've yet to mount them to a canvas yet, but here they are.  Sort of a meditation on what makes the 101 cover work, (if it does work)... as a composition... is just a series of shapes and colors. 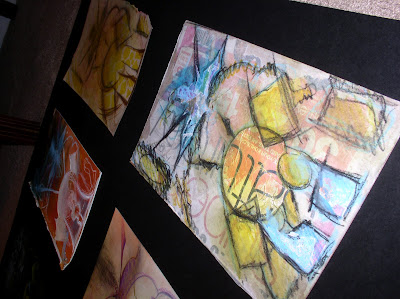 There's no denying my art IS startlingly different now, 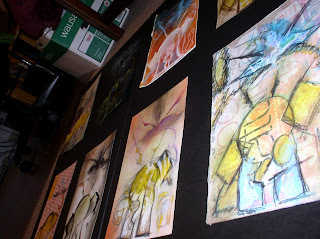 Or is it?  Some people tell me it's often less detailed,  or sometimes messier or simpler. 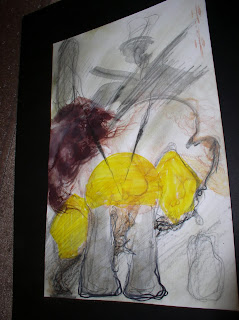 Btw, quick aside: check this out... recognize this? turn it sideways... and you'll see it's painted OVER that old mother child drawing i did last month? 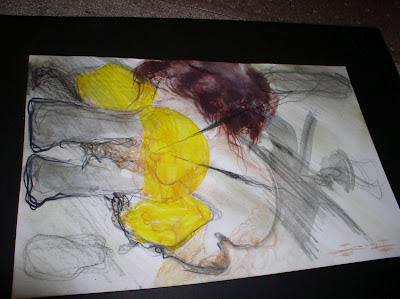 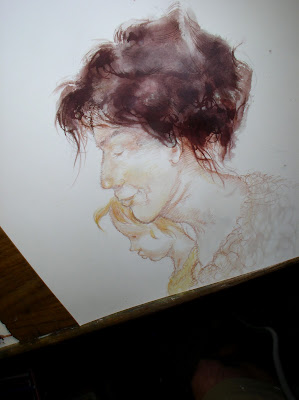 Here's a version on black britsol.

anyway.... but, on a good day, hopefully my current my art sometimes possessing a subtlety ( my asian or trees stuff) or abstract quality ( fashion or, well.. abstracts! ) stuff that i wasn't... ABLE. or even WILLING to even try back then,

..let alone to pull off. 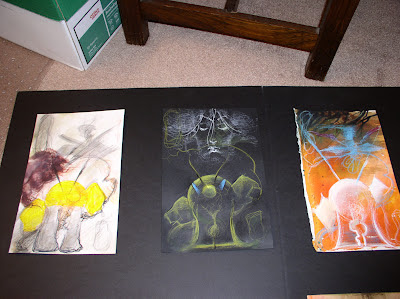 Not a legal way, but in a philosophic or conceptual wa  these make me ask myself, how can a series of of shapes and colors BE an intellectual property? 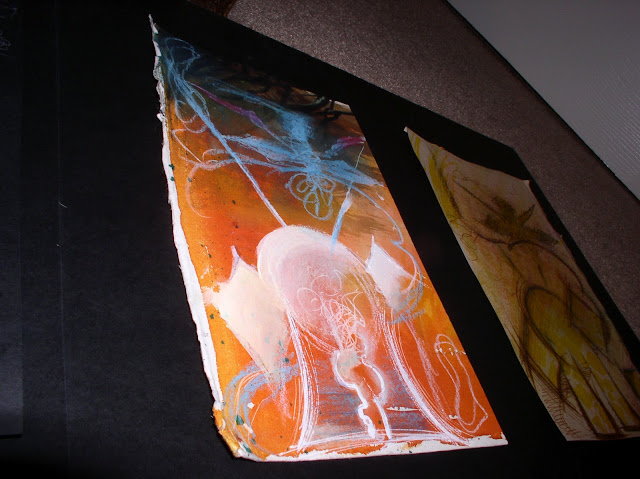 Does a yellow circular body and boxy knees make wolverine? Maxx, legs, the trout all too have that sam kieth 'hunched over back' i always draw... don't they? 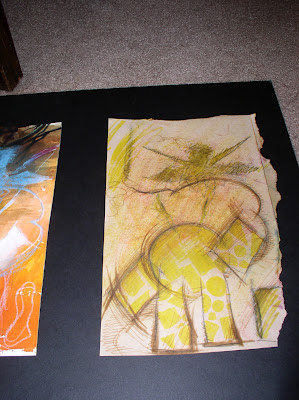 I always felt this way about the sandman, he's just ANY guy in a dark robe with black hair, is't he? It was neil's stories that brought him to life.

When fans say they want me to draw the Maxx again, they're just saying they want a "Purple hunched over shape" which their mind recognizes as "Maxx"... instead than wolverines' yellow shape, which is the same one as Maxx's shape, just in a different color. 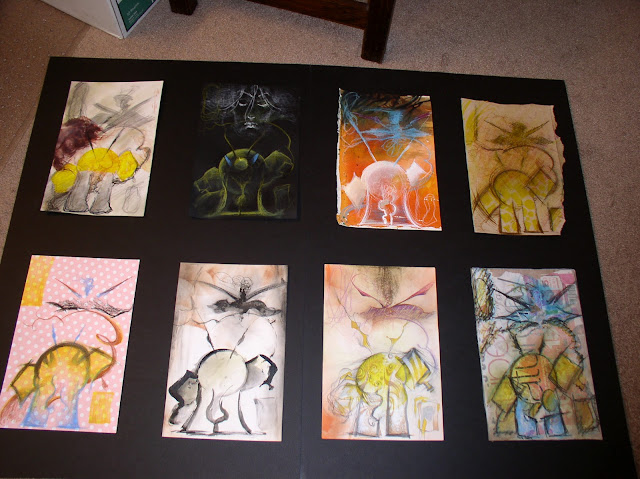 Course i know... emotionally... i get there IS more to it than that. 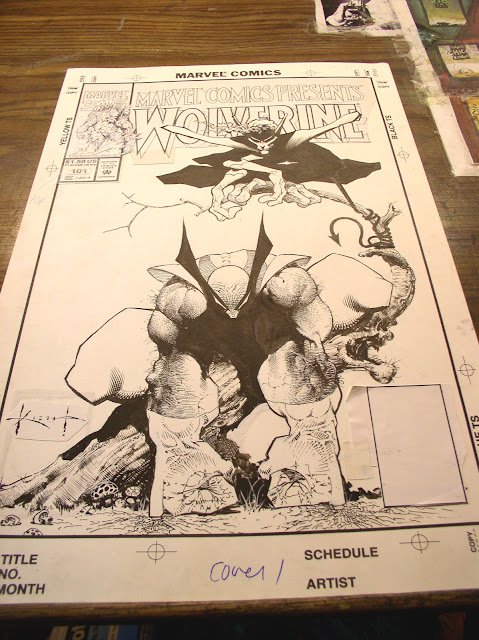 I understand that, that like Neil did, in my own humble way, i too filled in a whole story, characters, struggled and dramas that brought that purple shape to LIFE. 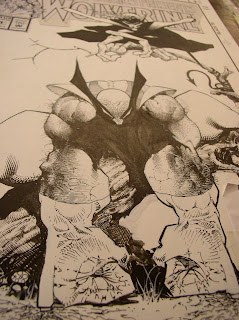 However,  i still maintain it was YOU, MY readers' imagination that brought anything i created to life.  My reader's creativity that did the 'heavy lifting', not just my pencil or brush.

And if you strip it down... doesn't it seem almost it's like zero-girl? .. everything almost IS just series of friendly.. or unfriendly.. shapes. 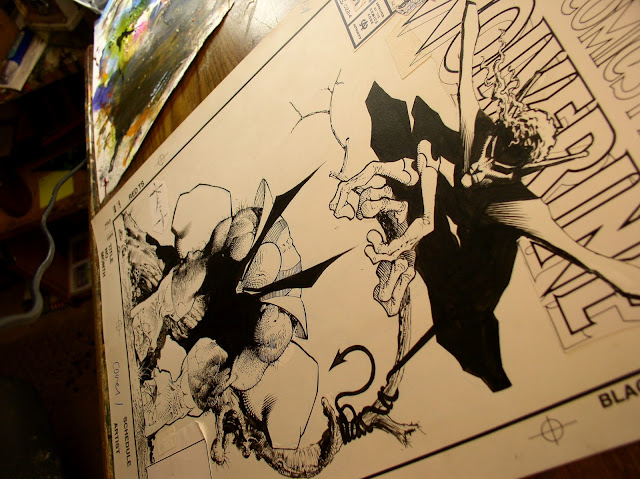 When alex/skinner dropped by... i was able to see some of my old art... through their un-jaded eyes.. it reminded me how accepting you ALL are... so good and nurturing of my old and new stuff.

These younger artists, and YOU guys/gals on the blog ... all help me see it's any dichotomy is mostly in my OWN head. All 'sam stuff' is all my art work IS as a continuous universe, which, duh... it totally is.

So of all of these... all 8 new ones and the old classic MCP cover, which one is MY personal fav?

Hard to choose just one? 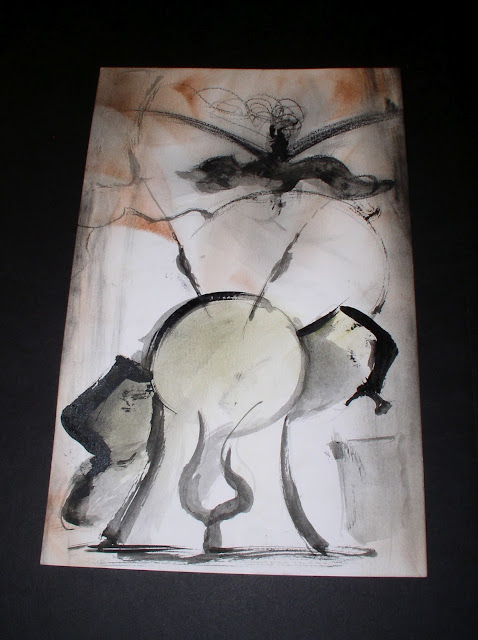 ....but THIS is probably the closest to my heart,

and my obsessive japanese brush painting sensibilities these days.