Taboos of Body Fat in Comics.

Here's something you don't see everyday, at least in comics.

Body fat. I wanna talk about tummies. Even though TONS of Americans are overweight, it's weird how in fiction, a fat person, usually only makes their way into comics/movies/tv if they're a comical foil. I have always had an affection for chubby woman's bodies in comics...  little spots, pouches.. things most male comic artists have seen a million times in their wives, sisters and daughters, (or woman artists notice in others, or their own bodies to varying degrees.)... are still Taboo to draw in comics. 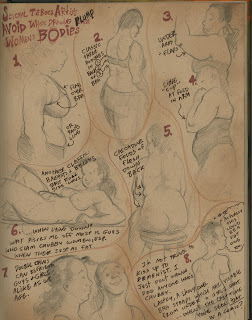 Now guys get fat too. My 'pot belly' character from My Inner Bimbo falls under the 'gross-monster' category. This is somewhat of a dodge, trying to poke fun at myself.  Many 'fat guys' learn to laugh at themselves out of habit, just like women do to beat others to the punch.

But for a main comic character, it's weird how you catch yourself 'self-editing' a figure... without even thinking. When you draw idealized male and female figures in comics, your always trimming off fat, or inflating muscles as if their water balloons. I got away with a few pot belly shots when i drew Julie in the Maxx, but that was partly tolerated because she was (for the most part) thin-ish, cute and blonde. 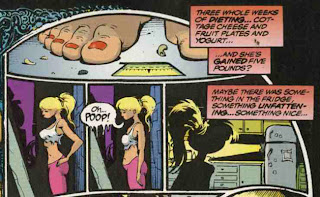 It wasn't until I started drawing Dana, that it sunk in that a LOT of fans, guys (and yeah, even some girls) may be turned off by ANY body fat in a heroine. 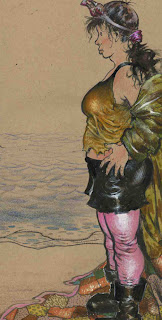 Yeah, I get why, but now that I have a spare tire myself, I want to draw some characters who look like, well... real people do. I know most comics and sci-fi are fantasies,  someone with an idealized body too. And I like drawing these impossibly skinny characters sometimes too. 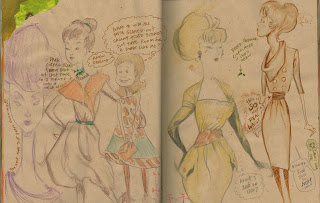 But i don't care, If wanna have a chubby heroine like Dana, screw it - I will.  Jamie and Gilbert opened this can of worms years ago. Terry Moore's woman have some curvy figures too.

As for my motivations, it's It's not so much  to glorify (or fetishize) fat or chubby women in general. It's... more.. just reflects what a ton of people are struggling with, everywhere. Comics can idealize, but also ... reflect too. 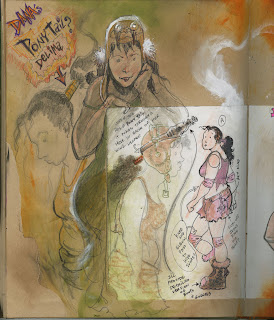 It almost seems a weird thing to keep editing quirky or pudgy things out of a creator owned comic, almost weird NOT to add flab or flaws. It's almost a denial of what makes us human. 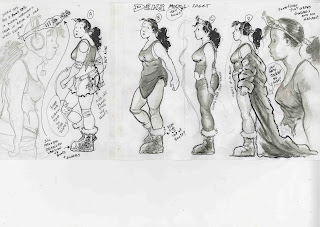 This also came up because I'm talking to a mysterious individual... and am in talks to do a possible Dana Toy Figure. So the question comes up, does anyone want to SEE, (let alone even BUY) ..a 'sam kieth chubby chick'?  (which, given the way i'm drawing these days.. might mean even chubbier than Julie, and might have (yikes) tats, or even worse (brace yourself) - body hair! I can see fans jumping ship in droves. 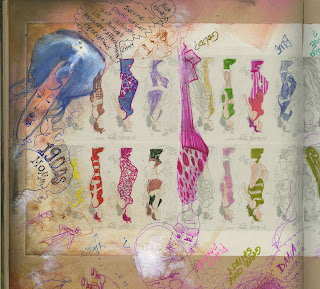 But on the other hand, I think I'm seriously seriously underestimate my fans. Sure, the amount into Dana may be less. But anybody who made it through the Maxx (or my art books) KNOWS to expect the weird, or possibly unusual or strange. 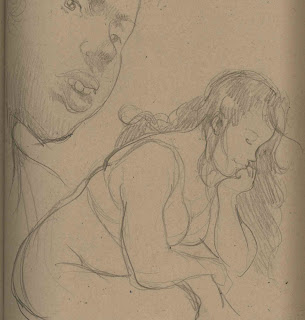 Hell, even if only a handful of fans were out there digging a chubby chick toy, how cool would that be? Just the fact there are so few comic characters with tummies out there with fat and flaws, it makes me all the more proud the folks to DO get it, totally get it!

I don't mean to preach or lecture.. more just work it out in my own mind. I also don't mean to come off as one of those 'sensitive guy' types sucking up to women, (who I usually really hate, even if i am sorta one myself sometimes).

Yeah, The female approval crap is always lurking, but many these rules apply to chubby guys too.