I hear from friends the first couple issues of Batman Confidential are out. I know myself too well to get suckered into looking at the printed comic. I always freak out. The look of printed comics is always a disappointment. Maybe it's the 'light through monitor' stuff, spoils me? I do like printed stuff in general, art books, i can appreciate how the eyes rest on printed art, but when i see my own stuff in print ... i dunno...
...ALWAYS looks worse printed... i always feel like somebody else drew it. It's too late by then, can't fix it. Have to move on - which is great because my opinion doesn't matter.
Here's some bat pages i drew in 'raw' form (above, before photoshop tweaks) and will throw 'em up so you can compare. 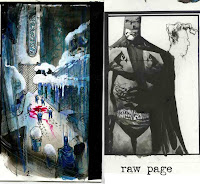 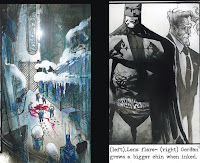 Hit and miss; sometimes digital is our warm fuzzy friend, sometimes the original hand-drawn stuff gets lost or watered down with Mr. Evil Computer. 'Overworked' art that loses the life in the inks/colors is a specialty of mine.
I think this is why i'm becoming increasingly interested in Japanese & Chinese brush paintings. Kinda like hand painting as opposed to 'for reproduction'—working on paper/canvas where you don't have a technical net to save your ass, just flung into the moment, fast and furious. 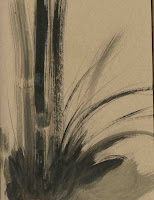 Thought it might be cool to check out my 'color notes' to him for the first issue. I'm sure everybody does this differently: corrections over the phone, written in e-mails; i did it this way with Jose because he liked it like this. Dave Stewart's coloring an Arkham hardcover—it's a whopping 96 pages... (finishing on the last few right now), so i was lazy and just wrote up color notes in an e-mail form to Dave. He seemed cool with that.

Funny the goofy stuff you say in notes when you're talking to another artist/colorist.
I still feel cheezy when i use a lens flair, or most digital trickery. Ever notice how most photoshop effects are looked at with suspicion among other artists? There's a trace of disappointment when they talk about it... they sorta always sigh, "...hell, i can do THAT... show me something i can't do with a filter or plug-in." Attitude. I feel it too.
Sorry i missed last week. Busting my ass to finish Arkham up this week!
Posted by - at 10:32 AM

Kinda depressed this weekend, no reason i should be. 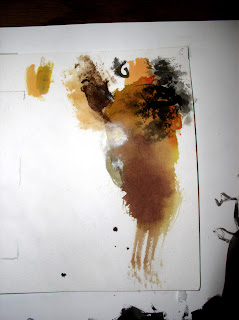 I took a bunch of pics of my studio to post, then realized it was stupid to post dorky pics of weird toys/crap i made/bought-at-thrifts made/stole/melted/drilled/beat-with-a-hammer mutilated or otherwise... defaced.
These are three imaginary friends of Nola, which is a book that's not out yet. Artists Vassilis Gogtzilas is drawing it! More on these three later... 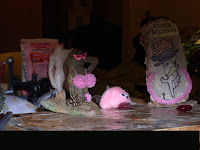 Figure you'd much rather see a piece or ART, rather than plastic or clay goofball stuff?
(Lower left is Leigh Dragoon's drawing of Nola, from an upcoming Oni book we're doing!) 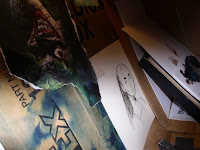 Then, I decided to draw little Trout and Bimbo FINGER PUPPETS, so people could print them out, and tape them to their fingers... 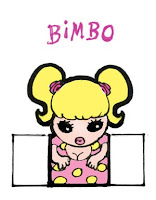 ...before i realized how finger puppets are actually an inspiration about how inventively i was pissing away one's Sunday. 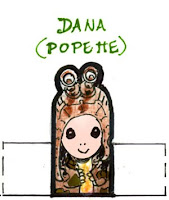 Then i thought, hell, maybe Sundays ARE sometimes supposed to an incredibly astounding waste of time.
I can feel the holidays are really over now, which is good and bad. Nothing like fresh steamy personal compost of CHANGE to wake yourself up, eh?
The Maxx DVD is FINALLY out. MTV stepped up for a commentary with me and the folks from Rough Draft. Also a frighteningly rotund looking short behind the scenes film of ME talking about the Maxx, drawing a budget-looking Maxx with Kleenex and markers. I was up all night so i was pretty fried by the time i flew in to Burbank, did the commentary, drew a Maxx and stumbled back onto a plane.
Got to see my old Maxx alumni friend Seth Kearsley, which was cool.
I wish my other Maxx co-hort James Dean could've got on the DVD too. Darn it!
So, since i owe a lot to the moldy old purple guy, i dug out a cover from the Maxx trade i did; it looks much different in B&W... before it was colored. So it's KINDA new ... if you don't squint. 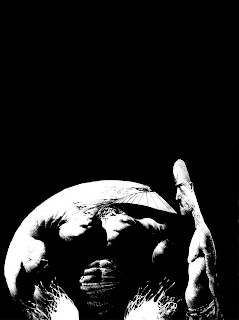 I will always have tremendously mixed feelings about this Maxx: so much fun up front, so many lawsuits-clusterfucks-nightmarish-bottom-falling-out crap in the end, like so many books from the post-crash Image days.
But i wanna try to remember what i hope WILL last—which is hopefully, the books themselves. The cartoon was cool, but the books finished what the animated show couldn't afford too. Drawing the Maxx, once upon a time... WAS fun. silly. invigorating. juvenile. experimental.
It also inspired a generation of NEW artists like Vassilis Gogtzilas, Leigh Dragoon, Tim Kelly, Josh Halger and many more. All these artists thought "Crap. they let a goober like THAT on TV??? Heck, maybe there's room for someone like me, then!" Yeah, they'd have made it in anyhoo... but it's cool to think every weird artist who sneaks under the radar helps the Alex Pardees create their own artistic home.
Despite whatever personal baggage i carry, or create, i just wanna say, in my more lucid/honest moments, i can never, EVER be ashamed of the Maxx... if i am only remembered for that one work alone, fucking-a. Cool. I'll take it.
I'll see what else no one's seen that i can dig out that might be cool. Here's one of the last panels of the Maxx book, one of my favorites.

Almost everyone's in there, too. Kinda 'glad to be unhappy' isn't it? In the meantime, back to Trout-crap and Bat-crap. Life goes on... thankfully.

I’ll give everyone all a break from blogging about human suffering, my navel lint or my aging kitty with no tail (whose name happens to be ‘no-tail’, seriously). My guess is you're mostly here to check out Art or Story stuff. 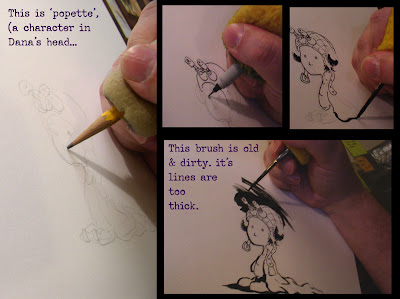 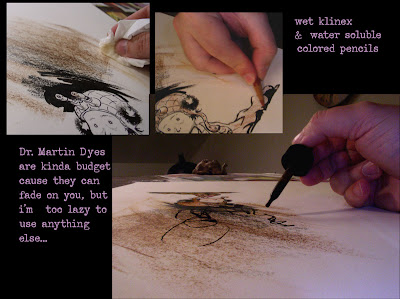 or whatever's lying around the studio (that you've probably never seen). 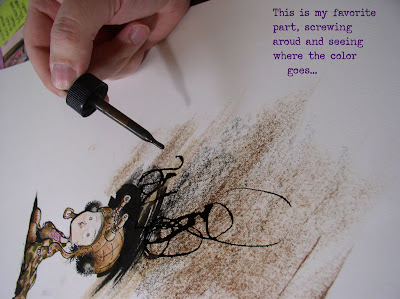 This was just more an excuse to avoid whatever DC work I'm supposed to finish! 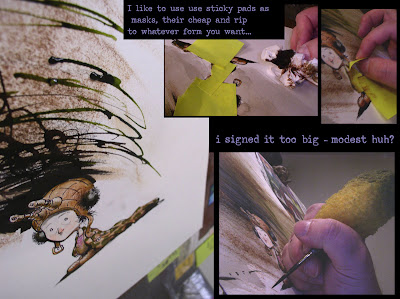 Okay, here's the scanned version, warts and all... 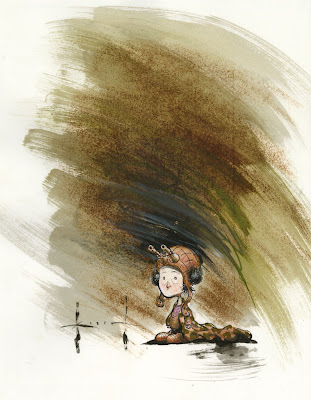 Check out the weird line visible from under the bristol, i guess there was something underneath it. Man, is my name waaaay too big or what? Didn't mean to, just got carried away making those brush lines...

Okay, pretty boring post this time, but will try & do something better for the next one.