I know it's not Tuesday... I just felt inspired... painted a bunch of small buffaloes for Mom this year for Christmas. I bought a frame and painted them to the size of each one of the little squares. 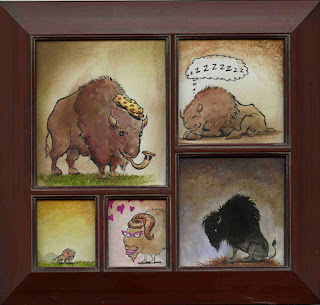 I tried to make one a retro lady buff with 60s hair and pointy Far Side glasses, but she just looks bone ugly, even with lipstick. What do you make a female buffalo lady look like ? Dunno. Eyelashes? Too late now. Oh well. At least Mom liked them... She liked the big guy with the cap, who's smoking a pipe. The frame is only 5 inches across so I had to work pretty tiny. So, lots of artistic flaws... which I kinda like.


Otherwise things are peaceful, a slight dusting of snow this morning greeted us here in the mountains. Digging through some old debris in the studio I unearthed this doodle I sent to some producer friends of mine: 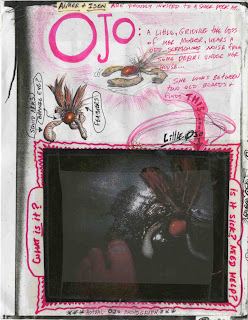 I taped a photo I took of little Ojo that I made years before the Ojo movie. I wrote all sorts of goofy stuff on the borders of it... kinda takes me back. Making a little Ojo was a trip: Remember, fish parts go bad fast!—then you have to dump them. Yuk. Well, part feathers. Part puuuurrrrs. Part slime. That's what this little guy is made of.

I painted this for my old friend James Dean Conklin as a Christmas present. My signature gets more and more sloppy... like chicken scratch... 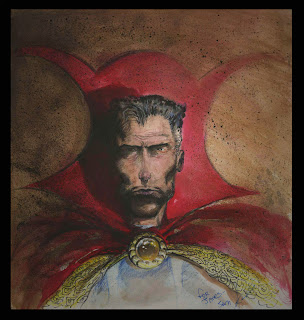 Hopefully James won't see this blog post BEFORE the art gets to him. I met James during theMTV days and he's been single handedly tirelessly doing all the animation for the old Ojo movie, and i've been piss poor at staying in touch with him lately. So hopefully this makes up for that a little. 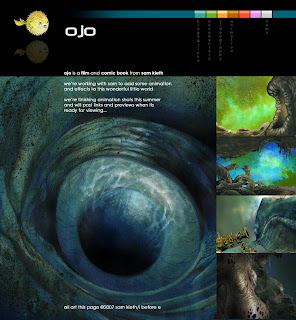 Also, a tardy thanks to Jenny Goguen for buying that batman piece for the auction for art college for the Alumni Association of Vancouver Island University! Thanks Jenny. Good cause. Every little bit helps. Rushed this week, holidays and all.. i'll do a bigger post next week.

First: Vintage Burgers.
Here's the controversial 'Hamburger In Space' page. Before I drew comics, I inked them. I'd ink anything to get into comics... Hamsters… Lame indy comics. Anything. I was shameless. Desperate. One job i had was inking an American comic version of a Robotech series that I did just an an *awful* job on. I often added weird crap in the background for the licenser to catch, just to amuse myself. So that's how the hamburger rebellion page was born. Kinda in your face: How could they NOT catch this? 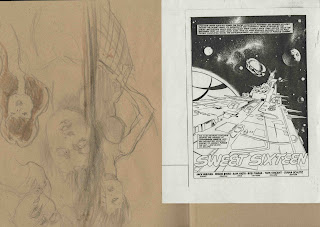 Lowly inkers trying to be 'bad'. Childish stunts that now, in retrospect, I'm rather proud of. The brown sketches on the left were what I did in sketchbooks to keep from going CRAZY while stuck inking.
Needless to say the book's editor, my old friend Diana Shutz, was NOT amused (can you blame her?) and promptly sent the page BACK to me just so I would ink black OVER the dreaded hamburger (which, i agree, WAS wildly out of place, given that it's outer space). How cool would it have been it if made it through and got published? Think of the shit-fit the anima fans would have thrown, too. 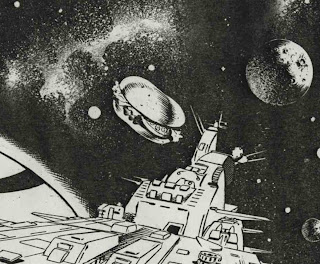 Plus, I worked really hard on that burger - lettus, onions, everything - and it doesn't even exist now, it's covered in ink. Thus, no one's ever seen it for like twenty years, until Today! Glad I made a photocopy of that sucker before I inked over it… whew! Quick thinking saved it from obscurity.

Now: Vintage Bimbos.
You may (or may not) remember an over-worked version of this Antique Bimbo in one of my sketchbooks, but here's a version before I got so overworked… 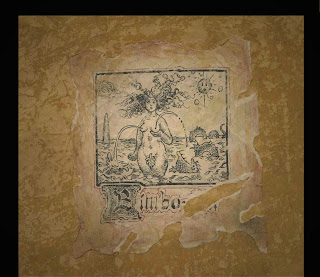 I love drawing the Bimbo in a historical context, like one of those old mermaids in sailing maps… all hand-drawn here, obviously, no layers or anything. It's funny how enjoyable it is to rip up paper and re-past it in again. So raw and unfinished. My old pal Vassilis is a master at this rough unfinished look, 'course he can illustrate like a mother too, so that helps.
I also did this with this Unpublished Venom Cover which both Marvel and I felt was too abstract.  Note this was during my "black tape on the borders to save ink" phase. 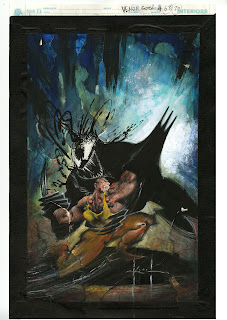 I ripped it all up, then pasted it back. I admit it doesn't make a very strong cover here; I think I was still too timid with color covers back then. Learning still. So I gave them a 'normal' version of this same cover which they did publish, then 'fired myself' as cover artist. Happily so; after all, I was pretty much repeating myself by then. I liked my early Venom covers, but time to move on. 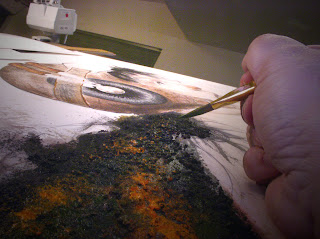 So many drawings and pairings of this girl clogging all corners of my studio. This painting almost looks better distorted than it does straight on. Working on paintings that are so BIG... sets off whole new parts of my brain, than comic pages do. 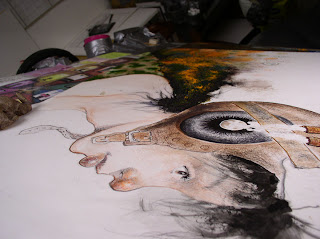 I get lost in her hair and helmet textures...  warm rusty browns and olive greens... I wish I would have added moss to this painting; you can never have too much MOSS in a comic page, can you? 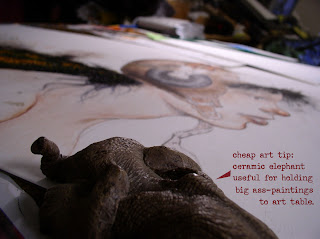 The Great She-Elephant, once again, clamps Dana  safely in place.


I am obsessed with moss. I hope I can ferment into moss after I croak—how cool would that be? Becoming moss?


Okay, time for this weeks budget sharpie finger puppet, which I may have already posted, (but hopefully not) .. a little Chibi-esque looking little face to wrap it all up, eh? 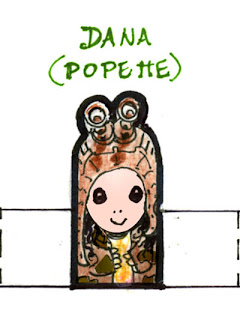 The Man with the Calabash Meerschaum Pipe.

This Captain (above) has nothing do with my 'Capain Should' character (below) from the Trout books.

Nope, this dude's supposed to be an old German WW2 Captain from a new 30 Days comic I'm doing for IDW.  Joe Lansdale's writing it (the Bubba Ho-Tep guy),  and I'm drawing it.  I just did a lame doodle of a Captain in my sketchbook by some thumbnails, which was mostly an excuse to draw the cool old fashioned pipe. 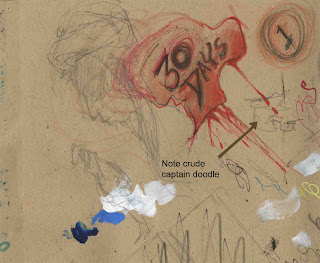 I've always loved drawing these shrelock holmes antique Smoking Pipes but didn't know what they were called until an old friend of mine pointed it out yesterday. They're known as meerschaum pipes. Part of them is  made from meerschaum clay, but the bit you see on the outside is made from a gourd called a calabash. It's cool to learn there's a *name* for what you've been drawing for years! 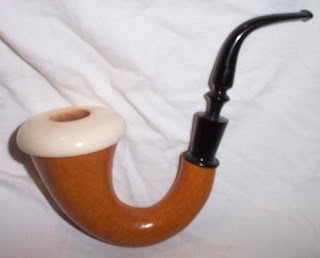 I wanted this guy's face here to be kinda rough and unfinished, obviously hand-drawn, not too much photoshop. 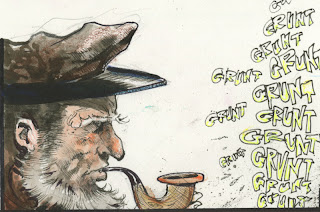 Okay, a little photoshop... I darkened him a bit... but not too overworked (unlike the first Captain in close-up, which is wildly over-rendered).  It's easy to get carried away. The top one is more flashy, but I actually prefer these more modest ones... 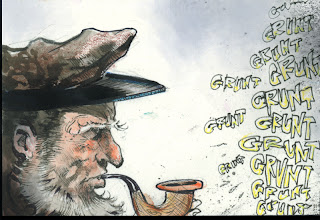 So what, you may ask, does a German sub Captain have to do with modern Vampires in Alaska? Well, you'll see once the book comes out, but first i gotta draw the sucker.
FEATURE FILM CONTRACT: Current  Status: in development hell.
While I was digging through prehistoric rubble in my studio, I came across a work assignment in grade class which I blew off and never finished.  Instead I wrote something on the back of it.... this: 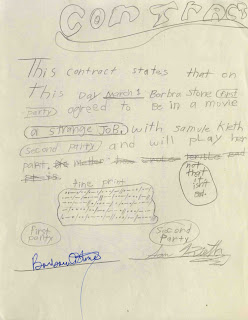 This was my transparent attempt to coerce my then-7th-grade teacher, Miss Stone, into being in a film i planned to shoot. One I obviously never completed. I was always planning a series of big ambitious projects: sprawling comics series, huge movies. Projects I hadn't a clue how to pull off. I'm still like this a little. Slightly better at finishing, but not totally.
I wonder where my teacher is now? Think she got over my not making her a famous actress?
I'm guessing she probably did.
Posted by - at 8:35 AM