Just for fun here's some layouts from the first Darker Image story Maxx first appeared in. 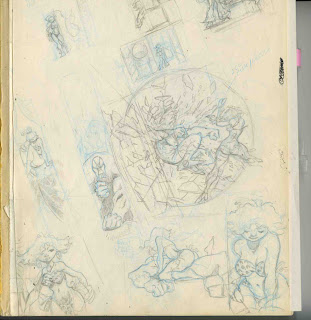 I was originally gonna put these in the 'Art of Sam Kieth' art book, but since there's so much unpublished Maxx crap lying around, these... (and tons of others) will instead will probably make their way into some giant 'Absolute Maxx' collection a some point down the road.
In the meantime, Chris Ryall passed this along to me (Thanks Chris) -  I guess some art blog pays tribute to different indie comics each week. Last week was Locke & Key, this week is 'Maxx Week', so guys like David LaFuente and others there are doing a different Maxx tribute piece each day.
http://www.thesindiecate.com/

Also...Yeah, comments, FINALLY, eh?  It's cool if people have their favs, like maxx, but thanks to all of you for also checking out the other art books, abstracts or just plain goofy non-super hero stuff I throw in here  too.
Never sure how much studio details are interesting, or just like everyone else's studio crap. I guess every artists does it different, or has different habits, styles as to How they do what they do.
... and yeah, I sometimes draw with my left hands. Mostly right. I talk about it a little in the first sketchbook. They are both good for different things.. and seem to look a little different too. Maybe it just seems like that to me.
I'll post again this weekend. And don't feel obligated to always post a reply, sometimes there's just nothing much to comment on is there? Just do it if something strikes you.
Wow, fans in Argentina too?  Awesome!
- sam
Posted by - at 2:19 PM